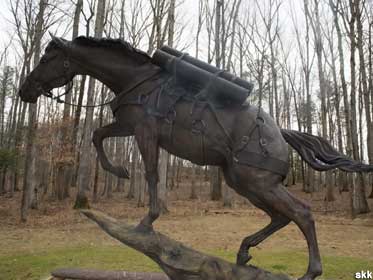 SSgt. Reckless was a war horse bought by members of the United States Marine Corps and trained to be a pack horse for the Recoilless Rifle Platoon, Anti-Tank Company, 5th Marine Regiment, 1st Marine Division. She served in combat actions in Korea by carrying supplies and ammunition.

The highlight of her nine-month military career came in late March 1953 during the Battle for Outpost Vegas when she made 51 solo trips in a single day, carrying a total of 386 recoilless rounds (over 9,000 pounds, carrying 4 to 8 24-pound shells on each trip) covering over 35 miles that day. The whole Battle of Vegas lasted 3 days. She was wounded in combat twice, given the battlefield rank of corporal in 1953, and then a battlefield promotion to sergeant in 1954, several months after the war ended.

For her exemplary service to the Marine Corps, Reckless was awarded two Purple Hearts (for the wounds received during the Battle of Vegas), a Marine Corps Good Conduct Medal, a Presidential Unit Citation with bronze star, the National Defense Service Medal, a Korean Service Medal, the United Nations Korea Medal, a Navy Unit Commendation, and a Republic of Korea Presidential Unit Citation. She would wear these awards on her horse blanket, plus a French Fourragere that the 5th Marines earned in World War I.

Reckless retired from active service with full military honors with the 5th Marines, 1st Marine Division at Camp Pendleton on November 10, 1960. She was provided free quarters and feed in lieu of retirement pay, per Marine Corps documents.